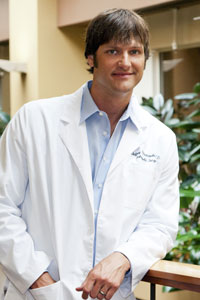 Are you an athlete who participates in contact sports? If so, you may be at risk of an FCL knee injury. The FCL helps stabilize the knee during side to side motion and can be injured from a tackle, fall or awkward landing. FCL tear specialist, Dr. Jeff Padalecki provides diagnosis and both surgical and nonsurgical treatment options for patients in Austin who have sustained an FCL injury. Contact Dr. Padalecki’s team today!

What is a Fibular Collateral Ligament Injury (FCL Injury)?

The FCL, or fibular collateral ligament, is located on the outside of the knee and helps stabilize the knee during lateral movements. This ligament is also referred to as the LCL (lateral collateral ligament) because it is located on the lateral (outside) side of the knee. The FCL is comprised of fibers that prevent the outer surfaces of the knee from opening or gapping, and allows the knee to complete side-to-side activities. An FCL injury is common among athletes who perform side-to-side movements such as ice hockey players. Dr. Jeff Padalecki, Austin, Round Rock, and Cedar Park, Texas communities orthopedic knee specialist, is highly trained and experienced at treating numerous knee injuries, such as a torn FCL.

The FCL is more flexible than its ACL or MCL counterparts, and typically less susceptible to injury. An injury to this ligament often occurs from pressure or an impact to the inside of the knee, thereby stressing the outside part of the knee joint. Typically if you injure the FCL, you tend to injure other structures in the knee as well.

What are the Symptoms of an FCL Injury?

How is an FCL Injury Diagnosed?

Dr. Padalecki will conduct a series of tests and a thorough examination of the knee to check for pain, stability, and range of motion. If an FCL knee injury is thought to be the diagnosis, additional imaging tests will be ordered which will likely include stress X-rays and an MRI. The FCL ligament rarely heals when it is completely torn but can heal if it is only partially torn. This healing can sometimes take up to 8 weeks. This aspect of this injury makes the clinical exam very important and is the reason why MRI scans are used so that if a complete tear exists, Dr. Padalecki can consider reconstruction surgery as an early option.

Have you sustained an FCL knee injury?

What is the Treatment for an FCL Injury?

The type of recommended treatment will depend mostly on the severity of FCL injury and the associated injuries to the knee.

Some knee injuries are treated by rest, ice, compression and elevation of the knee. You may need the use of a knee brace to restrict movement of the knee and allow it to heal for a period of time. For high-level athletes who are diagnosed with a partial tear, Dr Padalecki will usually recommend the use of a custom made medial compartment unloader brace so that the FCL injury can be protected. Use of anti-inflammatory medications (NSAIDs) and pain relievers may relieve discomfort and help diminish the swelling. The assistance of a physical therapist to strengthen the knee and increase flexibility and range of motion and strength may be required after a certain amount of healing time to restore normal activities.

Surgery is necessary in more severe circumstances – primarily when there is a complete tear to the FCL with other associated ligament injuries as well. Dr. Padalecki will perform a lateral knee reconstruction, which replaces the torn ligament with a tissue graft. The grafted ligament is passed through bone tunnels and fixed to the femur and fibula using screws. This procedure is an open-knee procedure and is commonly done in conjunction with arthroscopy of the knee.

What Occurs after FLC Surgery?

A rehabilitation program will be prescribed at your first post-operative visit with Dr. Padalecki and is critical prior to resuming normal activities. Therapy will focus on returning motion back to the injured knee and surrounding muscles to help prevent any scar tissue build up after surgery. After that is achieved, you will follow a progressive strengthening program to protect the new ligament.

For more information on an FCL injury, such as a torn FCL, please contact the orthopedic office of Dr. Jeff Padalecki, knee specialist in Austin, Texas.